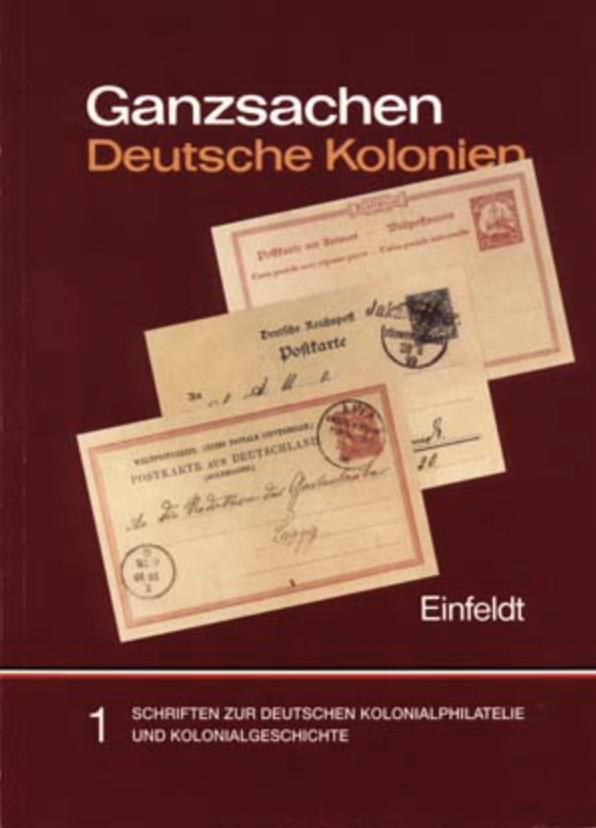 Postal Stationery of the German Colonies (only in German) 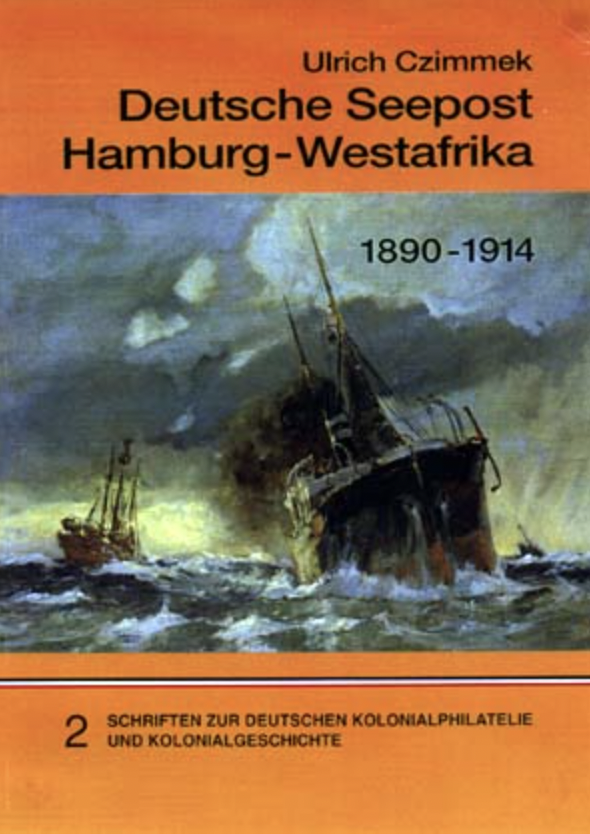 Timetables for and Journeys of the Woermann Steamers 1890 – 1914

with Prices for Seapost covers and cards.

This book is an absolutely essential complement to ARNO GOTTSPEN”™S work of 1988 and indispensable for anyone concerned with the Seapost of the West Africa lines.

I remember the moment when I was for the first time leafing through ARNO GOTTSPEN”™S long awaited book. I was rather baffled. I was looking for timetables and journey dates, for information regarding the usage of postmarks on certain routes in order to ascertain where the ship had been at the time when the postmark was affixed. Instead I found detailed descriptions of all the seapost items known to the author as well as an Operations Index for the line. In spite of the enormous industry which had gone into the work and much useful information from the archives of the Hamburg Head Post Office, the historical kernel of the matter was lacking.

That which one would have wished to find in GOTTSPEN”™S book is now available in CZIMMEK”™S. His book collates on 140 pages the timetables of all Woermann Lines on the West African routes for the years 1890 – 1914. Worked into this information are the actual journey dates so far as these were ascertainable from the “™Deutsches Kolonialblatt”™. Most importantly the author has made the effort to relate each steamer voyage from1894 to the relative cancel, a Herculean labour which deserves our greatest admiration. Special mention should finally be made of the corrections to GOTTSPEN”™S postmark usage data and the systematic pricing of all items, separately for each territory. 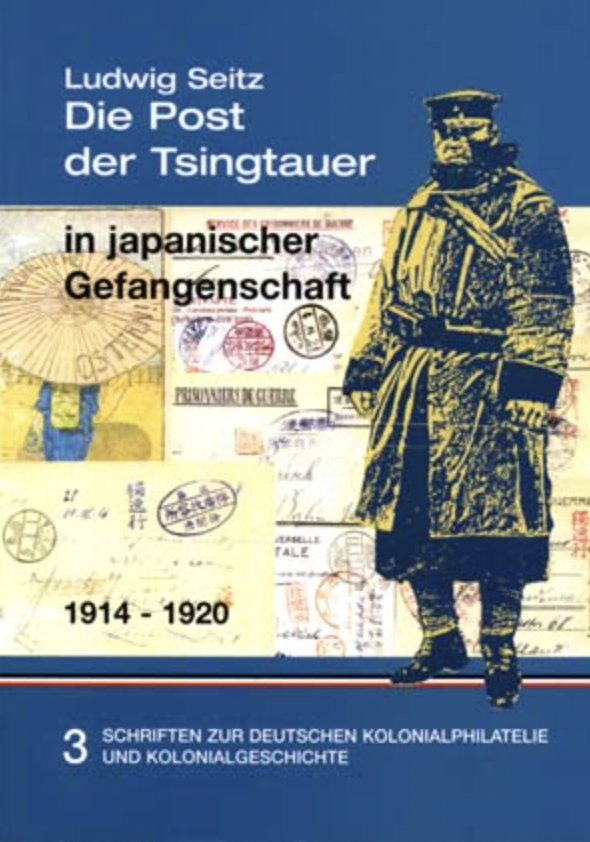 In mid 1998 the Study Group issued as Vol. 3 of its monographs Ludwig Seitz”™ handbook on the Prisoner of War mail of the Tsingtau Germans
in Japanese captivity.

More than thirty years have passed since the first and until now the only comprehensive treatment of this subject by Helmut RÃ¼fer and Wolf Rungas.
During this time much new information has come to light and not a few errors have been recognised in this work, many due to the lack of knowledge of the Japanese script on the part of RÃ¼fer and Rungas. Moreover the publication of that book seems to have been unduly hurried and issued with insufficient regard to the breadth of the subject matter. Our member Ludwig Seitz attempts to remedy these shortcomings. The author spent some time during World War II in Japan where he acquired some knowledge of Japanese which even enabled him to interpret the complicated script in the Han, the “™chops”™ of the censors.
He deals with the subject in great detail, his knowledge backed not only by his own comprehensive collection, but by an index built up over more than forty years, which contains copies and information from other important collections as well as from German and foreign auction catalogues. The text is greatly enhanced by the presence of over 1,400 illustrations, representations of nearly all known postmarks and seals including those of the post, the censors, the camps themselves and others as well as of various forms and registration labels. A large number of the many attractive postcards produced by the camp print shops are also pictured.

The book in a general chapter introduces the subject of Camp Post, points to various possibilities for specialisation, provides an historical overview as well as correcting mistakes in earlier literature. It explains Japanese script where this is relevant to the subject; also Japanese numerals and dating and the system underlying the use of the cancels; further, it lists the means open to prisoners of war for sending mail
and explains how such mail can be recognised. An index of the Tsingtau units and administrative offices is included. Other chapters deal with the organisations set up to help prisoners of war, the Central Search Bureau of the German Admiralty and its Japanese sub-office, the Information Bureau in Tokyo, postal traffic with the Germans left behind in Tsingtau and with Germans in non-Japanese camps (Torpedoboat “™S 90″™ and auxiliary cruiser (“™Cormoran”™); also post from the transports which were taking returning prisoners back to Germany in 1920. A short section deals with Japanese prisoners in German hands. Finally at the end of this general chapter there is to be found a guide to pricing.

The second part of the book deals with the individual camps arranged according to a system explained in an introduction. For each camp the same order is then followed for the listing of all the appertaining postmarks, the postal stationery, any special forms and picture postcards.
Everything is also illustrated. Each of the 18 camps which housed German and Austrian prisoners of war (from the “˜Kaiserin Elisabeth”™) has a separate section devoted to it. A map is attached which shows where in Japan the individual camps were situated. 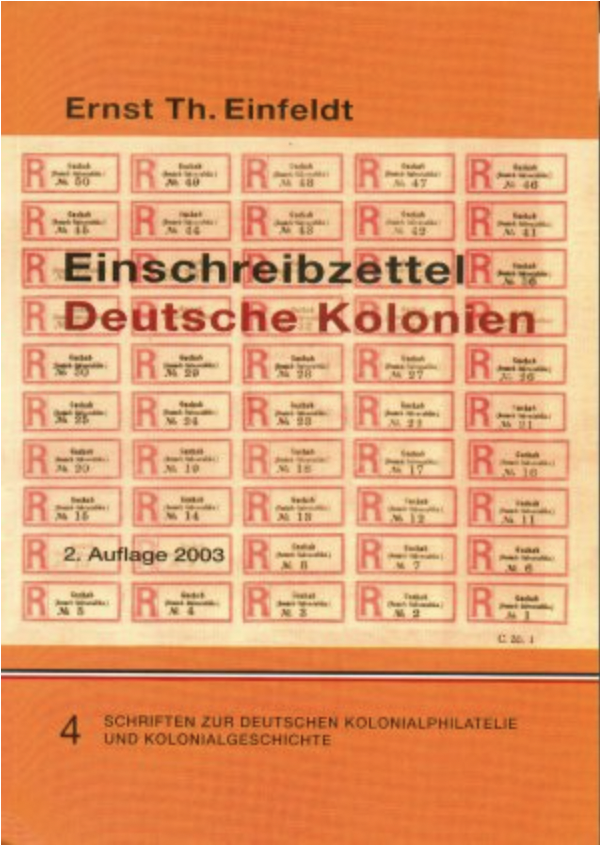 Ernst Einfeldt
Registration Labels of the German Colonies
280 pages with many illustrations
Vol. 4   (in German)

Registration Labels of the German Colonies (only in German)

This soft-bound 280-page volume is in small-format, similar in size to the study-group”™s postmark catalog and reports. It includes research as of 28 February 2003 with the majority of changes relating to usage dates.

The greatest advantage of this second-edition is the illustration of each registration label now found adjacent to its description, avoiding difficulty searching for types in the tables. 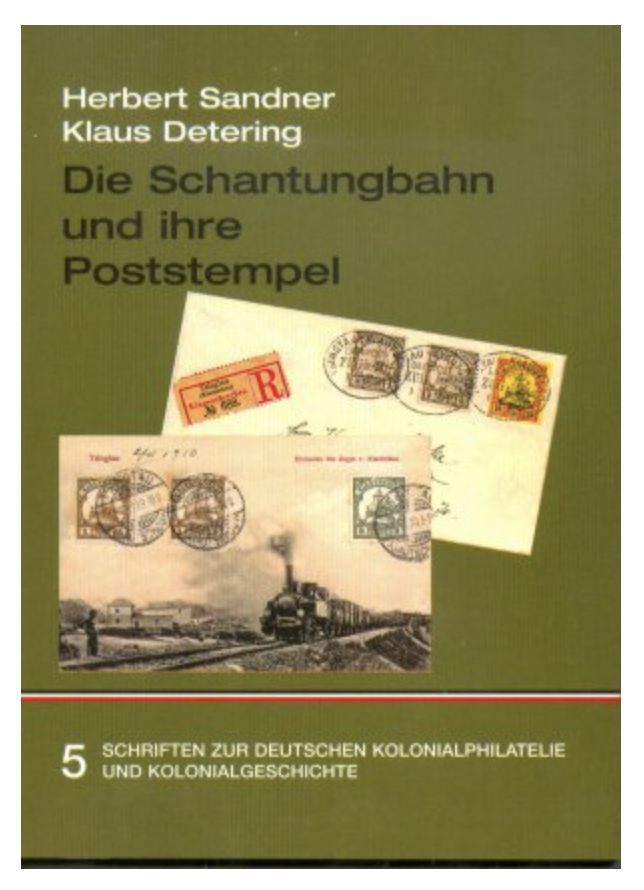 The Shantung (Shandong) Railway & Its Postmarks (only in German)

Handbook Publication 5 of the Study Group has the German Title “Die Schantungbahn und Ihre Poststempel”, which includes a description of the Shantung (Shandong) Railway and its postmarks along with a catalog & values.

This soft-bound 72-page volume illustrates all postmarks and includes abundant cover examples of which more than a third are in color. Valuations are from years of registration work by Herbert Sandner and presented in table-form illustrating primary postmark & associated mark usage frequency. 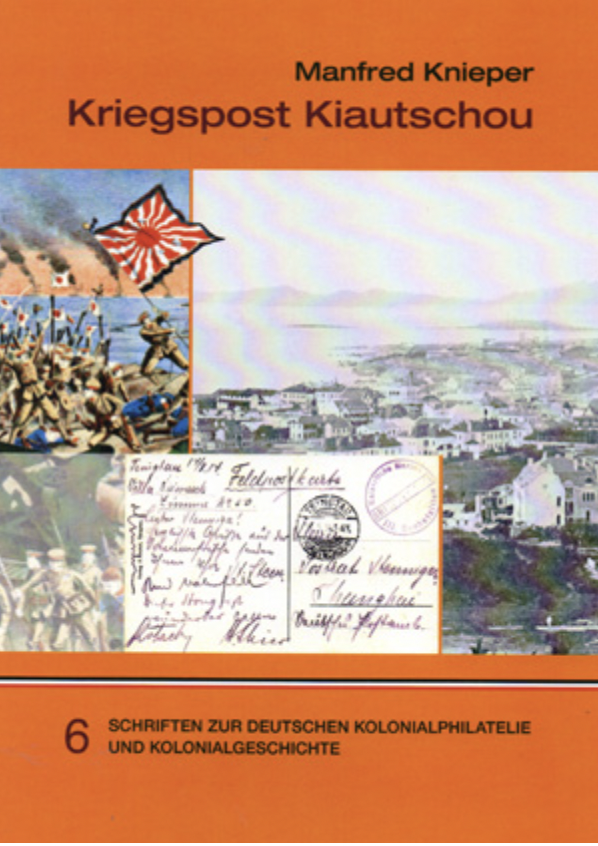 Manfred Knieper
War Mail Kiachow (Kiautshou)
The Postal History of the Kiachow territory between mid July and 6th of November 1914 including the mail via Siberia with Russian censorship
179 pages with more than 250 colour illustrations
Vol. 6   (in German)

A portrayal of postal history in the Kiachow Territory from mid-July until 6 November 1914 with inclusion of Siberian-Routed Mail having Russian Censorship.

The first section of this book covers the to-date most complete examination of the delayed, censored & returned German Mail from China via Siberia at the outbreak of the war in 1914. Such mail subsequently reached it German destination by way of the United States of America.

The second section of the book is an analysis of authentic war-period mail between 2 August until German capitulation on 7 November 1914, with a large portion of the illustrations in color. The author succeeds in selecting censorship markings on authentic mail versus that of fictitious and philatelic favor-marked mail having the “b” cancels of Tsingtau on postal stationery and franked-pieces.

Handbook Publication 6 of the Study Group having the German Title “Kriegspost Kiautschou” is a soft-bound 179-page volume containing 250 colored illustrations on archival photo-paper. 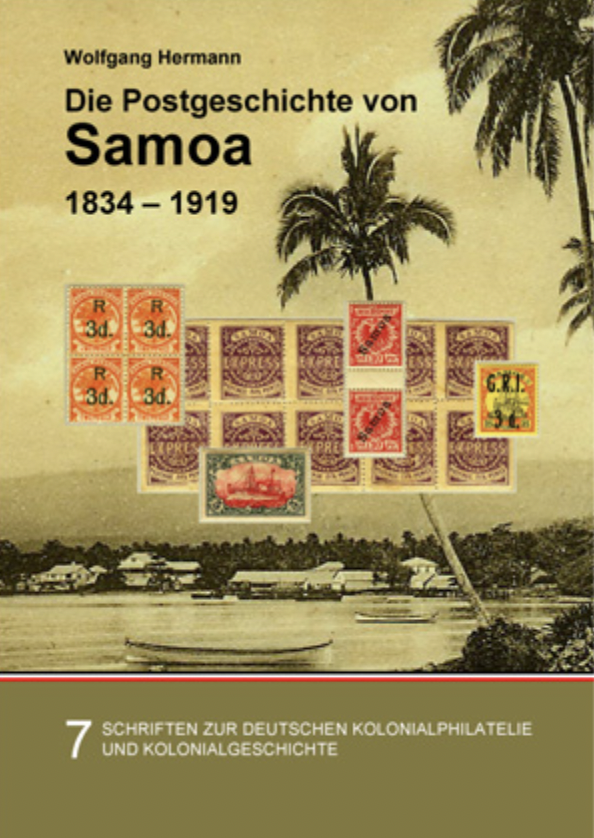 Wolfgang Hermann
The Postal History of Samoa 1834-1919
350 pages with more than 550 colour illustrations
Vol. 7   (in German with English introduction)

Postal history commences with the early mail of the missionaries (1834) and continues with mail from the following years, which generally transited via New South Wales, with a description of the express mail of 1877-1881. The latter, also known as “Agar Private Mail”, which also issued postage stamps, ended for financial reasons in 1881. Thereupon, “Municipal Mail” from Apia followed between 1882-1886 with postage stamps acquired, affixed and postmarked at the United States of America Consulate.

In September, 1886, the German Postal Ship Agency opened in Apia, whose German Reichspost Postage Stamps were delivered by the Steamer “Lubeck” of the Australian Branch Line sailing from Sydney to Samoa.

John Davis of New Zealand was appointed Samoan Postmaster on 12 December 1886 by the King of Samoa, Malietoa Laupeda, albeit Samoa did not belong to the Universal Postal Union but was similar to the earlier “Express Mail”, a private mail service. Accordingly, such mail required double-franking in order to be sent to countries belonging to the Universal Postal Union, remaining competition for the German Post Office until 28 February 1900.

After long disputes among the great powers at the time (as described, for example, caused by the role of the German Navy in the Pacific), Samoa became a German Colony on 1 March 1900. Only the smaller eastern islands along with Pago Pago Harbor were given to the United States of America.

The German colonial period extended until 29 August 1914, when New Zealand Soldiers occupied Samoa as a result of World War I and used German postage stamps overprinted “G.R.I.” along with “Pence” and “Shilling” values. New Zealand military fieldpost mail is also covered by the book. Subsequently, three New Zealand postage stamps with a “Samoa” Overprint were issued and used.

The book also includes mail from interned German-Samoans along with mail from the various camps. Deportation of Germans in June 1920 is another subject covered in the book.

Mail from all the aforementioned postal periods is described along with their postmarks, with the book ending on 28 June 1919, when Germany declared its renunciation of its colonies after losing World War I. An index enables search for terms independent of the table of contents listing.

Handbook Publication 7 of the Study Group having the German Title “Die Postgeschichte von Samoa 1834-1919″ is a hard-bound 350-page volume containing 550 colored illustrations along with a Bibliography of 196 entities. The book has an introduction in English language. 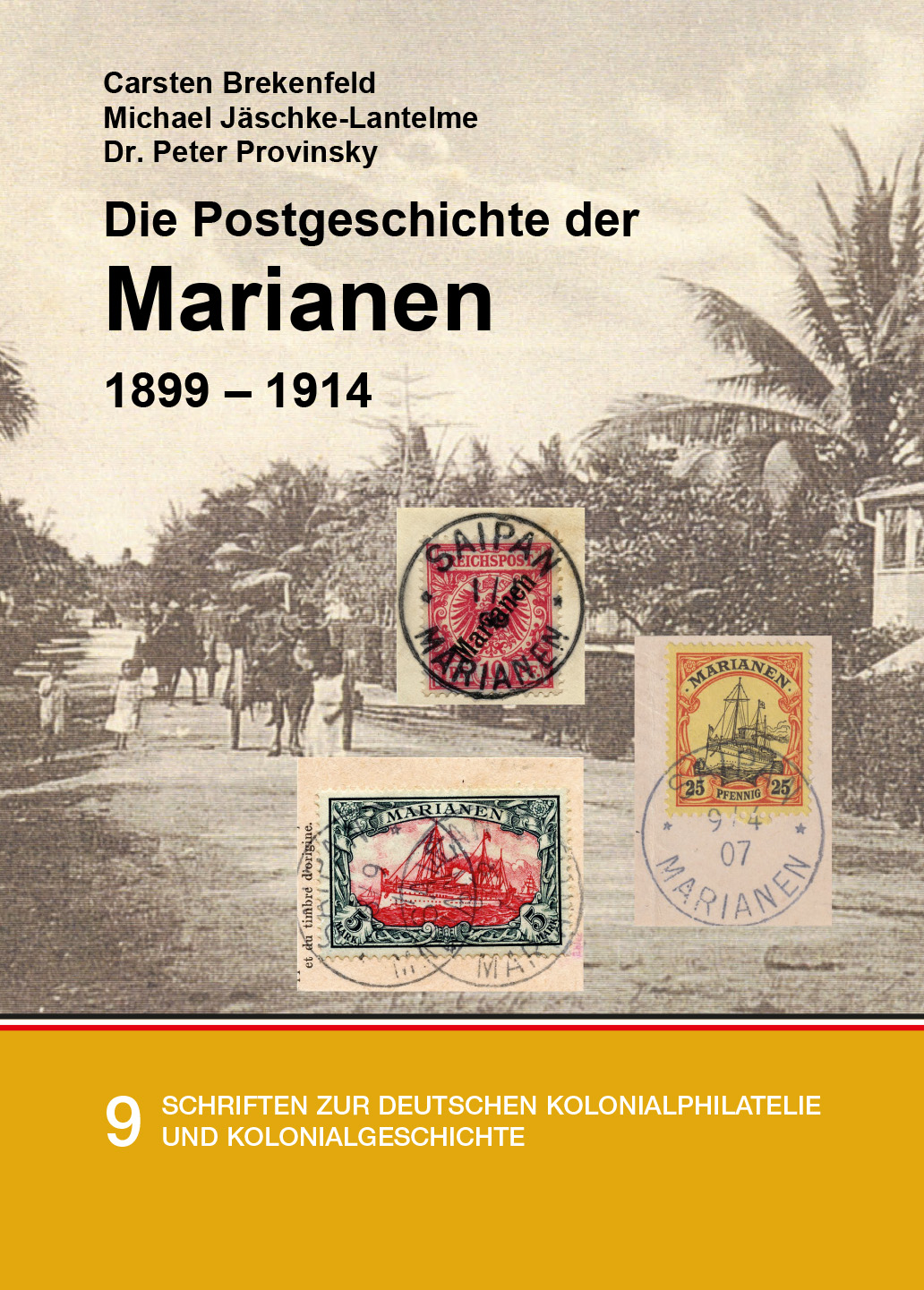